Would you like to switch to the accessible version of this site?

Don't need the accessible version of this site?

E-Cigs Could be Just as Hazardous for Your Teeth and Gums as CigarettesIf a Root Canal Can't be... 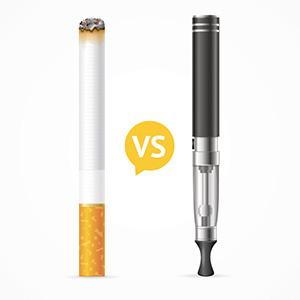 More than 20 million people in the United States use electronic cigarettes or e-cigs as an alternative to tobacco smoking. While many users believe "vaping" is a healthier alternative to regular cigarettes, recent research into the health effects of e-cigs could put a damper on that belief. There's particular concern among dentists that this popular habit could harm users' dental health.

E-cigs are made with a chamber that holds the liquid vaping solution and a heating mechanism to heat the liquid and vaporize it. Users inhale the vapor, which contains nicotine and flavorings, as they would a traditional cigarette.

The nicotine alone can be problematic for dental health as we'll see in a moment. But the vapor also contains aerosols that some research indicates could damage the inner skin linings of the mouth in a similar fashion to the smoke of traditional cigarettes. One study by researchers with the Université Laval in Quebec, Canada found evidence that e-cig vapor increased the death rate of mouth cells, and led to greater cell irregularities over time.

According to other studies, there's evidence that e-cig vapor may disrupt the balance of the oral microbiome, the communities of both beneficial and harmful bacteria that normally live in the mouth. The imbalance in favor of more harmful bacteria could increase the risk for dental disease, particularly periodontal (gum) disease.

Finally, nicotine from e-cigs seemed to create similar conditions in the mouth as it does with tobacco. Nicotine in any form can constrict blood vessels and reduce the body's ability to fight infection and to heal. Research indicates both forms of nicotine increase the risk for dental disease and make treatment more difficult.

These findings only identify conditions created by e-cigs that could be problematic for future dental health. Although we don't fully understand the long-term health effects of this new habit, based on the evidence so far the mouth may not fare so well. It's looking like e-cigs may be no safer for your teeth and gums than the cigarettes they replace.

If you would like more information on the health risks of electronic cigarettes, please contact us or schedule an appointment for a consultation.

Untreated tooth decay can destroy your teeth; prompt action as soon as its diagnosed will help prevent that undesirable outcome. And even if decay has advanced into the tooth's pulp and root canals, there's still a good chance we can stop it with a root canal treatment. Using this procedure, we can clean out the infection and refill the tooth's interior space with a special filling to protect it from further infection.

Although root canal treatments have gained an unwarranted reputation for pain, they rarely cause even the mildest discomfort. More importantly, they work, which is why they're the go-to treatment dentists use for advanced decay.

But sometimes a unique dental situation might make performing a root canal extremely difficult—possibly even doing more harm than good. For example, trying to access the interior of a tooth with a crown restoration might require removing the crown, which could further weaken or damage the tooth. In other cases, the root canals might have become calcified due to trauma or aging and become too narrow to access.

Even so, we may still be able to save a tooth through a minor surgical procedure called an apicoectomy. Rather than access the diseased area through the tooth crown as with a root canal treatment, an apicoectomy makes access to the infected tissue at the root end.

An apicoectomy also differs from a root canal treatment in that we'll need to surgically go through the gum tissue. After numbing the area with a local anesthetic, we'll make a small incision through the gums at the level of the infection. After removing any infected tissue, we would then fill the space with a small filling to prevent re-infection. We then close the incised gum tissues with sutures and allow them to heal.

With the help of fiber optic lighting and surgical microscopes, endodontists (specialists in interior tooth problems) can perform an apicoectomy quickly and with very little trauma at the surgical sight. If you undergo an apicoectomy, you should be back to normal activity in a day or two at the most. And like its sister procedure the root canal, an apicoectomy could help preserve your teeth for many years to come.

If you would like more information on this and other treatments for tooth decay, please contact us or schedule an appointment for a consultation. You can also learn more about this topic by reading the Dear Doctor...

Find us on the map